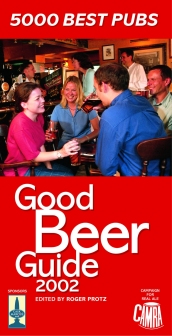 Edited by Roger Protz. Published by CAMRA and sponsored by Cask Marque. The 2002 edition of the CAMRA Good Beer Guide offers a whole new reading and drinking experience for lovers of real ale. The guide has been overhauled and redesigned from start to finish. There are still 5,000 of the best pubs in Britain that offer cask beer in tip-top condition but 4,000 of the entries now have longer descriptions and there are a 1,000 shorter try-alsos ("Inn Briefs").

"Don't go to the pub without it!"
The Good Beer Guide 2002 costs Ł12.99 from bookshops or direct from CAMRA head office. For CAMRA members the price is only Ł9, so if you're not a member of the Campaign, now is the time to join!

In addition to the usual definitive Breweries section, there are articles on the state of the brewing industry (excerpts below), the battle to save Britain's country pubs, the campaign to improve pub food and the growing number of bottle-fermented beers.

The state of the industry

In the past ten years over 40 breweries have closed and the regional and family brewers' share of the beer market has fallen from 22% to 15%.

Cask Marque is one response to that but the main cause is the way the large pubcos demand deep discounts from big breweries, cutting out the smaller ones. 73% of pubs are closed to small brewers.

If a great wine-making region or brand in France was under threat, the French government would do something about it.

CAMRA continues to campaign for all landlords to have free choice of at least one guest draught beer.

In the branch area...

These pubs were voted by CAMRA members as being worthy of inclusion.

By way of contrast with the Good Beer Guide, the latest edition of the AA's guide lists the following curious selection for Cambridge, with the claim "best pubs for character and real ale".

The Good Pub Guide has a strangely similar selection: it lists the Anchor, the Cambridge Blue, the Eagle and the Live & Let Live.