All pubs have been given permission to open until 1am on Tuesday June 4 to celebrate the Queen's Golden Jubilee. However exemption orders can be issued for known problem pubs.

-> The Publican 5-Mar: All pubs granted 1am extension for Queen's Jubilee

Various Cambridge city centre pubs have expressed a desire to open in the early morning for World Cup matches. At first only Northampton, Blackpool and Birmingham pubs managed to persuade licensing magistrates that it's a "special occasion" and therefore qualifies. Then in April the Lord Chief Justice ruled that this does qualify as a "special occasion", so magistrates should now grant licences to suitable premises. 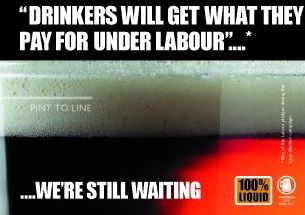 In the last few months there's been a massive campaign by CAMRA, which persuaded many MPs to support it. The fact that full pints were promised in Labour's 1997 manifesto was a telling argument.

Unsurprisingly, the trade fought back with a short pints campaign, scaremongering that such a measure would cost them money (an argument which implicitly admits that short pints are a rip-off). So now the Government has announced that it's going to legislate for 95% liquid to be acceptable as a 'pint', probably before the summer recess. In other words, it's Ok for you, the punter, to be charged - and taxed - on something that you're not guaranteed being given.

This year's Budget at long last introduced a sliding scale of duty for small brewers, which will help them compete with the deep discounting of the large ones. It'll also help the small brewers invest.

For the smallest brewers, producing up to about 120 kils per week (1 kil = 144 pints), the discount is 50%. Hereabouts that means just City of Cambridge, Milton, Captain Grumpy's and the likes of Iceni, Lidstone's - the very smallest. Larger brewers (up to about 700 kils/week) such as Woodfordes will get some relief.

It remains to be seen to what extent the relief will feed through to the price of a pint. On the whole it probably won't.

In February, Competition minister Melanie Johnson (the former County councillor here in the 1980s) announced the 1989 Beer Orders would be revoked since they're now irrelevant. The only 1989 big brewer still with a big pub estate is Scottish and Newcastle and its pubs may well be sold within a year. The Competition Act 2000 provides better means for correcting any competition problems. The Department of Trade and Industry plans to focus on the problems of small brewers.