The Zebra on Maids Causeway, Cambridge already has a claim to near- uniqueness, being one of just two pubs in the country with this name (the other is in Leeds). Since Ralph and Ania Holland took over in June, it has a further unique selling point as the city's only pub selling genuine Polish food - of which more later. 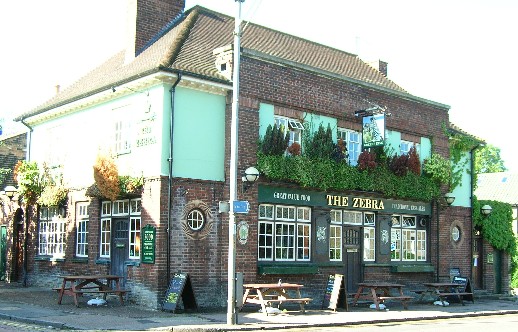 <- The Zebra
A handsome 1930s building, the Zebra has two bars separated by an open corridor. The big windows give it a pleasant, airy feel which should be accentuated by the new colour scheme planned to replace the garish orange and blues currently predominating. Owners Greene King have also promised to clean up the exterior.

Ralph will be well known to many local pub-goers having previously been assistant manager at the Mill, Old Spring and Burleigh Arms. His wife Anna-Maria (Ania for short) is from near Gdansk in Poland and has vast experience in cooking for family functions, as reflected in the fascinating menu. There are eight standard traditional Polish main courses, priced between £4.25 and £6.50, including vegetarian options. These are complemented by daily specials - on my visit Beetroot soup, Lazanki (pasta with fried sauerkraut) and, for dessert, sweet pasta (apparently amazing). If you can't make up your mind, you can have a selection of fishes on a platter for £10. There are also plenty of non-polish dishes plus a selection of starters and light bites.

On the real ale front, Greene King IPA and Old Speckled Hen are joined by two guests from the Greene King list. Ralph hopes to be able to put on a mini- beer festival in October. A good selection of wines and malt whiskies is also on offer, along with Tyskie, Poland's best selling beer.

You can listen to live music of the blues/rock persuasion on Thursday and a Monday quiz will soon start up.

The recent ups and downs at the Zebra, along with the smoking ban and rotten weather, haven't helped Ralph and Ania in getting started with their new venture but they fully deserve to succeed and we wish them well.