Wetherspoon have failed in their bid to open a new pub on the Cambridge Leisure Park off Cherry Hinton Road Cambridge. City magistrates backed the contentions of the police than a further set of licensed premises on the site would stretch their resources too far (there are 14 such premises on the site, none of which sells real ale, and the site apparently accounts for three per cent of violent crime in the South Cambs police area).

After going through some troubled times earlier in the year, the Navigator at Little Shelford is now in the capable hands of Jools Lemin and her brother Andy Tibbett, who are also co-licensees of the White Horse Waterbeach. Real ales are Greene King IPA and a changing guest from the Greene King list. The kitchens have been completely modernised and, like the White Horse, the pub specialises in traditional Thai cuisine. 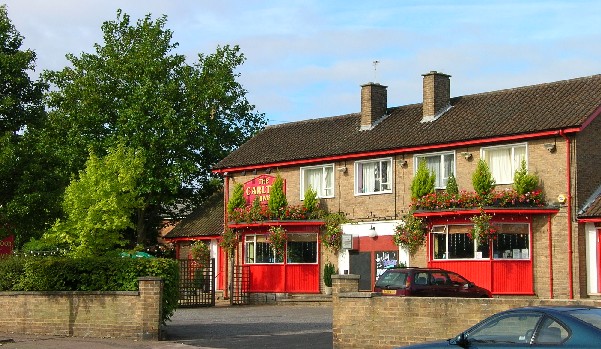 The Carlton Arms ->
ALE 328 featured a crawl of all the known keg-only pubs in the Branch area, of which, fortunately, there were only six. However, another has turned up. The Ship, a Charles Wells-owned estate pub on Northfield Avenue Cambridge sells Eagle and Bombardier but only in "smooth" form.

Our list of pubs regularly selling locally brewed beers unforgiveably failed to mention the Carlton Arms which often has Elgoods and other local ales, including the elusive Cambridge Moonshine. 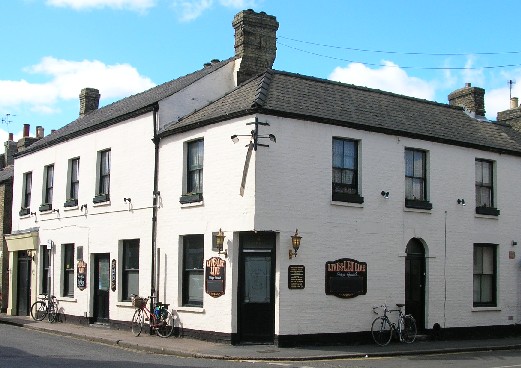 <- The Live & Let Live
The already excellent Belgian beer menu at the Live and Let Live Cambridge has become even more mouth-watering with landlord Pete extending the bottled ale selection to 40. These include your editor's personal favourites, De Ranke XX and Saison Dupont, plus unusual beasts like Alvinne Bruin, Boerken and the gloriously hoppy Taras Boulba. There's also the changing guest beer on draught, invariably something exotic, along with the ubiquitous Leffe. 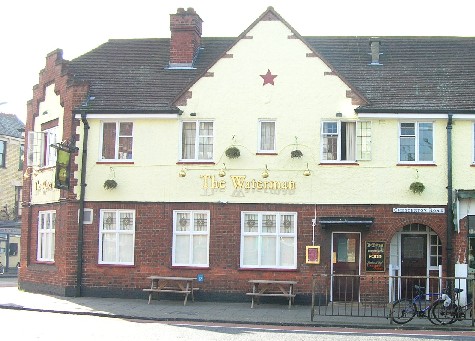 The Waterman ->
The Jolly Waterman on Mitchams Corner Cambridge has, in their own words, been "reinvented" as the Waterman (which was in fact its original name). Owner and chef Refa has worked there for 18 years and has wielded enormous and very impressive changes at what had become a frankly boring pub. In the bar facing Chesterton Road, one wing has been shortened to enable enlargement of the kitchen thus creating a very snug area with leather settees. The bar counter has also been cut back so that it just serves this room, enabling the other bar to become more spacious. The whole is very tastefully furnished, smart but still welcoming. At the back a suntrap patio garden has been built cleverly using decking and paving to make best use of the limited space.

An interesting menu features main courses between £6.95 and £11.95 plus some slightly pricier "signature" dishes like Cous Cous Royale (North African food is a feature here). You can also get sandwiches, burgers, wraps and side orders. Real ales are Adnams Broadside and Shepherd Neame Spitfire.

Since Ron and Ann Beach took over the Cross Keys in Saxon Street, Cambridge last December, this delightful little split-level pub has gone from strength to strength. The original four handpumps have been replaced with six gleaming new ones which dispense an ever changing selection of two session bitters and four stronger ales - a recent visit found Caledonian Deuchars IPA, Camerons Best Bitter, Brakspear Bitter, Youngs Special, Adnams Broadside and Theakston Old Peculier in residence, all benefiting from the newly installed cooling system. The nicely idiosyncratic decor also continues to develop, one addition being a huge family bible on an ornate stand - given to the Beaches because the owners knew it would be looked after. The bright yellow exterior is still attracting attention and Ann reckons this is now the most photographed pub in Cambridge. It's good to have more choice in the real ale scene in this part of town.

Lawyers, near the corner of Lensfield Road and Regent Street Cambridge, has had a subtle name change to The Advocate (though older readers will recall it as The Oak). Tetley Bitter remains the sole real ale.

At The County Arms, Castle Hill, Cambridge, the cask beer range has expanded to five - Everards Beacon, Tiger, Sunrunner and Original plus a changing guest.

The smoking ban, at the time of writing, had been in force a couple of months and reports from pubs on its impact have been mixed. The awful weather hasn't helped trade either, of course, but many pubs say that their regulars who were/are smokers have adapted and that some new people are coming in. On the other hand, we know of one city centre local without a garden or patio whose custom is down 30%. Out at Teversham, the Rose and Crown has attracted publicity by creating a "smokers' bar" in the garden, using an old burger van. Those local pubs which previously banned smoking might have been expected to suffer from loss of a unique selling point but the Free Press, for instance, say their trade has, if anything, increased - helped no doubt by the pub's other attractions, including what many would judge to be the best pint of Greene King IPA in town.

Pub closures in our area continue unabated. Latest to go is the Royal Standard on Mill Road, Cambridge, which is being converted to a restaurant. Over at Bourn, the Duke of Wellington is currently closed; there has been no application for change of use to the Council so hopefully this is just a temporary hiatus.

The Unicorn at Trumpington has changed hands and held a garden party in early September featuring 10 real ales and a real cider. Our spies report that beer quality here is now very good and the food is of a high standard.